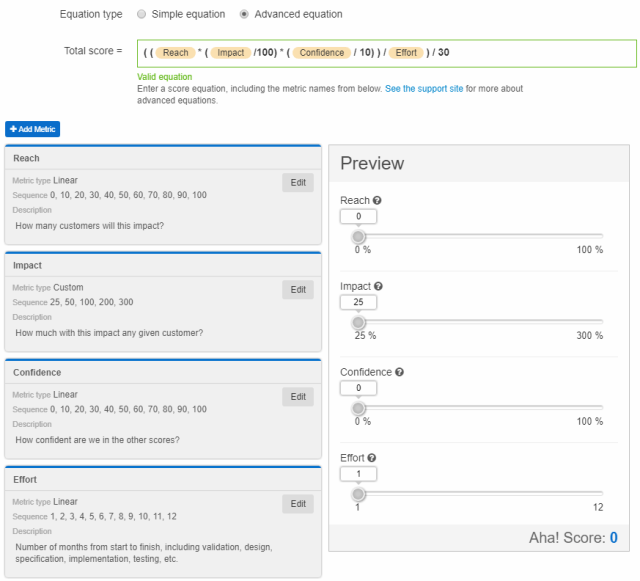 Working out what to build next with the tried-and-tested quantitative method of RICE Prioritisation with Aha! Product Management scoring.

There are many ways to work out the order in which your ideas should be brought to life and it’s soooo tempting to go with your gut. You know what’s important, it’s obvious, Client X mentioned it just the other day, so it must be the most important thing, right?!

What is RICE Scoring?

If you’re here you probably know what RICE scoring is, but here’s a quick summary:

Aha! Scoring Metrics only work with whole numbers, so here’s how I configure RICE scoring:

These numbers may seem a bit out-of-a-hat but each one has some reasoning behind it:

This one’s simple: it’s the percentage of customers who will be impacted by the work.

It might refer to your entire customer base or perhaps a specific segment — perhaps you have a segment you’re focusing on that this could refer to and you’re asking “What percentage of these customers will be impacted?”.

This basically measures the proportion of customers you most care about who will be impacted.

Expressed as a percentage, Impact refers to how much each user will be impacted. If Reach is “How many?” then Impact is “To what extent?”.

Expressed as a percentage, how confident are you in the accuracy of the other three parts of the RICE equation?

I know, I know, we haven’t got to Effort yet and ideally Confidence would come last but RIEC just doesn’t sound as good and if we started estimating customers’ resultant Happiness we’d be nearing a whole different realm of fish.

In practice this comes down to how much validation exists for the proposed work and how sure we are that it’s necessary. Implementing HTTPS may be 100% but a tweak a single customer suggested last year may be closer to 10%.

How many months the work requires from start to finish, including everything from design, validation, development, testing and deployment. You could also think of this as delivery time.

Estimating effort has historically been a point of contention, particularly amongst Scrum Masters. There still doesn’t seem to be a consensus on whether a Story Point refers to time, effort, complexity or some other equally-intangible thing.

Nevertheless, the most useful metric in my experience is the total number of months it will take to deliver an item. You can work on multiple things at once, of course, but I find this metric to be the most actionable when it comes to projecting how difficult and time-consuming something will be.

How it works in Aha!

Here’s a screenshot of my configuration from Settings > Account > Scorecards: 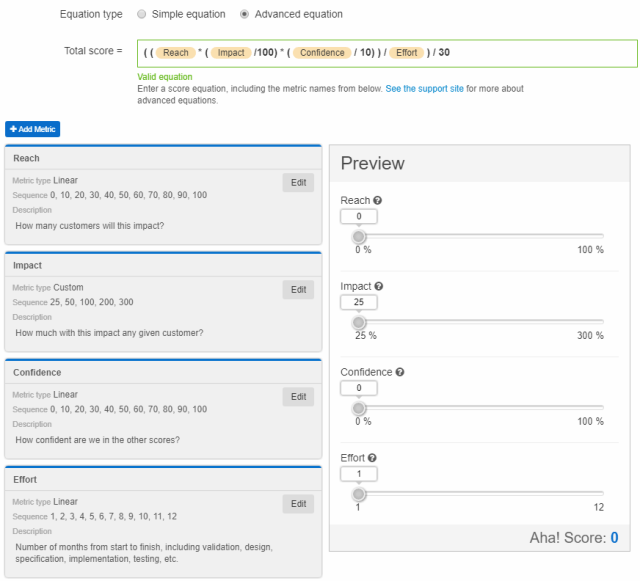 The equation is ( (Reach* (Impact/100) * (Confidence/ 10) ) /Effort) / 30 which, using the scales above, gives you a number between 0–100 which is useful because if all your scoring methods yield a similar range then scores can be compared between product lines.

In short, you multiply Reach, Impact and Confidence, then divide by Effort then divide again by 30.

One interesting property of this equation is that if Confidence = 0 then Score = 0, which totally makes sense: if you have no confidence in your estimates whatsoever then you shouldn’t proceed.

Where to use this?

RICE scoring works in most contexts but does particularly well for working out the order in which you should tackle Initiatives and the importance of each Feature, by which I mean which features are critical and which are not.

As we approach the end of December I’m turning a very critical eye to what I’m doing in the year ahead so now is the perfect time to be revisiting past assumptions and working out what’s really important for 2018.